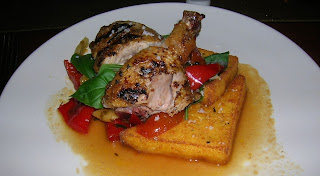 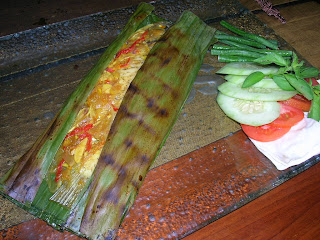 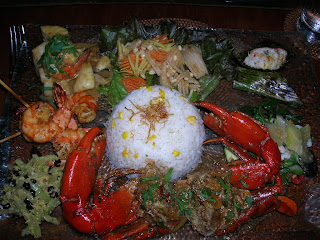 To end our trip of Asia we decided to spend a few days somewhere close to the sea. We had stayed in some real dives on this trip. Had Yao springs to mind with its 5 cockroach rating. A few places in Laos were very basic but still ok. It's just how Laos is. So after scouring a few websites to find somewhere casual, chic and really cool to end our trip. I found the Alila Manngis. It's a few moments from the wonderfully dull seaside town of Candidasa.
The hotel itself is really cool. It has no beach, so the pool area is the focal point. It is an inverted pyramid shape. Enough space around it to relax without having to listen to the people next to you.
The restaurant though is a big draw here. Sea Salt is its name. The chef is an Australian, so she is used to cooking with tropical ingredients for Western palettes. It is set within a traditional Balinese pavilion and is inspired by a nearby Organic Sea Salt Farm. The views over the coconut garden, pool and sea are magnificent.
There is a cooking school and it seemed to be very popular but at $100 I thought it was a tad expensive, especially after our disastrous evening in Kota Bharu.
The pool side menu was short and sweet. There was enough to keep you going through the day till the evening.
Sea Salt had quite an extensive menu, mainly Western influenced but they still had a few Balinese favourites there. It also has a good wine list. We were quite happy at that, as it had been some time since we had drunk wine.
The salt they used as I said came from a nearby Organic salt farm. It was really good. I had some just on some bread and it wasn't too sharp, a nice mild salty taste.   The bread they served was good and cooked in the kitchen that day. The homemade basil olive oil and chilli oil were quite nice to dip the bread in also.
For some reason when we arrived there I had massive cravings for some familiar food. Maybe it was the surroundings etc. No idea, but my cravings were silenced. The first night we had grilled chicken served on a bed of polenta with a tomato and basil sauce, and a fish (forgotten what type) smeared with a spicy sauce and wrapped in a banana leaf and grilled. Both were excellent and well cooked.
The highlight of the stay was the Sea food platter. It was a huge plate of different sea food cooked in Balinese and Indonesian style. The centre piece was the crab with it's lovely flesh. When it comes to crab or lobster it's all hands with us. The prawns were divine and one of the curried fish spoke to me in biblical terms. The rice I think we never touched. It was all about the sea food.
Sadly our stay came to an end. We spent the last morning by the pool, refusing to leave. We wanted to stay for ever. We nearly did.
Alila Manggis
Posted by Mzungu at 08:58 No comments: Links to this post