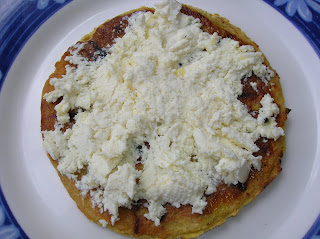 The arepa is more or less one of the only true indigenous foods to come from South America that is still popular today. This native bread originated from the Northern Andes of either Colombia or Venezuela.
They are essentially made from ground corn or maiz flour, salt (sometimes) and water. The dough is formed and then shaped into rounds, however big you want them, and then either fried, grilled or baked.
I do not know anyone who makes arepas the old fashioned way, and I am pretty sure I have never eaten one either. Nowadays, everyone uses a pre-cooked arepa flour. In the good old days, the days of “las abuelas”, to which everyone in Medellin reminisces about. Those poor old abuelas soaked the corn kernels, peeled them, ground them in their large mortars, known as pilónes. This they then dried, boiled and then ground into an arepa dough.
As you can see, it was a time and labour intensive way. So thankfully for las abuelas of today, it’s a lot easier to make arepas. You can also buy ready made ones as well. Even made with yucca flour. I know! Only problem with these aprepas, is that they are lower in nutritive value and it’s protein is decreased by half.
Most people in cities and large towns today buy premade arepas. It’s easier, and less time consuming. As city inhabitants have no time for to spend 5 or 10 minutes mixing the flour with water and salt, and then shaping them,.
I have become less of a fan of arepas as time goes by, except for arepa de chocolo. It’s the only one I like nowadays. They are so sweet, and have some flavour.
Arepas are generally eaten at breakfast time. Grilled, then buttered and a tad of salt on it. Then as my wife likes it, with lashings of quesito smothered on it.
There are countless restaurants selling arepas with all types of toppings, and I mean all types of toppings. These range from a simple cheese topping, to the Antioqeunan. Which as you would imagine comes with beans, platano, chiccaron and slices of avocado as a garnish. Hideous. But we are in Antioquia. Don’t go to a sushi bar, you get a paisa roll. See ingredients above. Not good.
In the area we are currently in, visitors from the city come here to sample a bit of the countryside for the day or night if they have a farm nearby. There is a small outdoor place that has a giant sign saying “Ricas Arepas”. From Friday nights to Sunday afternoons it is jammed packed with those city folk getting their fill of handmade arepas, that little bit of the country life they desire so much. Thing is I’ve eaten the arepas from there. They are ok, but not rica as they claim.
There is another type of arepa,, called arepa de mote. It’s made with the ashes of a fire. They are mixed in with the flour, and it gives the arepa a greyer colour, and some added taste and texture.
There was a story going around about a small town, somewhere in Antioquia, that the entire population came down with some serious illness. After many months of doctors testing, patients getting more and more sick. Noone coming up with anything. Someone discovered that the inhabitants of this pueblo had been eating arepa de mote a few times a day for many many years.
It turned out that the ashes added to the flour, in small doses is actually quite beneficial to the digestive system. But continual doses over a long period of time have the opposite effect.
Thing is, this being Colombia, the people of this town apparently still regularly eat their favourite arepa de mote.
Will they ever learn. I doubt it.
Posted by Mzungu at 03:58 1 comment:

Chocolatina Jet – The Best Worst Chocolate in the World 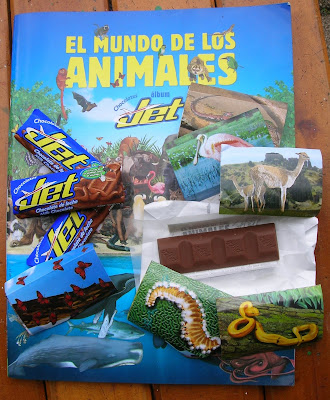 It really is the best worst chocolate in the world. Not a lot more can be said really. The scary thing is, I have become addicted to it. It is a real struggle not to buy large packs of those small choccie delites. Well maybe we should not call it chocolate, as I’m sure some chocolatiers in Switzerland would take it as an offence. I do sometimes.
The good thing about these small bars, is that you get a sticker in each one, that goes in their album of the animal kingdom. Bad for your health, good for the brain. It reminds me of the dinasour album that I used to try and fill for many years when I was a wee child.
So now the excuse is we are only buying the bars to fill the album. Honest. Only about 150 more stickers to go.
We are going to look like a bar when we are finished.
Posted by Mzungu at 17:00 1 comment: 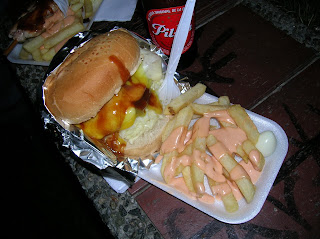 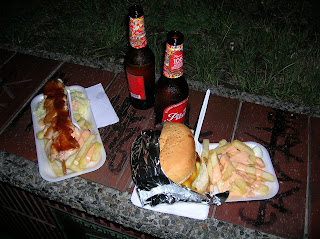 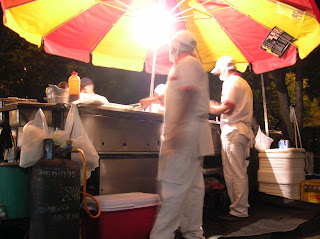 Every country has it’s after hours food. That really bad food that you love to eat after you’ve had way too many drinks on a Friday or Saturday night.
My weakness was those kebab vans that you always found near pubs. It was a love hate relationship. They tasted soooo good once you lost all your taste buds. But once you were sober you despised yourself for eating such shit. They used the cheapest meat sucked off the bone by a machine then compacted into this oval shape ready to be cooked and then reheated time and time again until it was sold.
In Mexico I used to eat a lot of Gorditas. Deep fried fatty tacos. Just watching them cook you put on a few pounds, and your arteries clogged even before you took your first bite.
In Egypt the countless times I ate a Dynamita. A loaded pita sandwich that had everything bad for you in it. But soooo good…
All of these foods I have eaten and only should be eaten after several drinks. Never have I seen these foods being consumed by sober people. Until I hit Medellin. La 80 is one very long street and at several places along its busy roads are stalls selling some bad nasty food.
Not only are they bad for you health wise, but the portions are huge. The burgers would make any grown Texan cringe.
Did you know that all Paisas are banned from eating contests, because for them it’s an everyday meal.
Las hamburgesa stalls de la 80 are famous for cheap filling food. Only good for eating after way too many beers, but as I said the amount of people young or old, fat or thin cram around these nightly stalls gorging themselves on these monstrosities. Without been intoxicated.
As a so called foodie, I have my weaknesses. And these fatty, greasy foods that are not good for you. I do not know why, maybe it’s being in a city surrounded by bad and badly cooked food, that has weakened me. Please forgive me.
Maybe this is what this blog is all about.
Forgiveness.
Please forgive me for even thinking of going to these stalls without consuming unimaginable quantities of alcohol.
Please forgive me for my repeat visits to try all what they have to offer.
Please forgive me for ordering the special version of everything. Ie the larger version.
Please forgive me for actually thinking that as they have quails eggs they must be sophisticated, and therefore somehow ok to eat.
Please forgive me.
Please.
Posted by Mzungu at 16:53 1 comment: