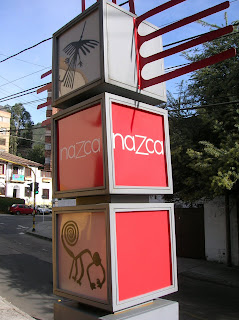 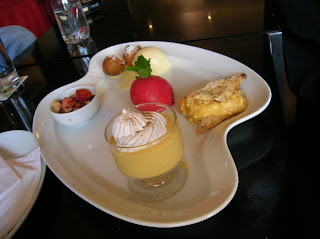 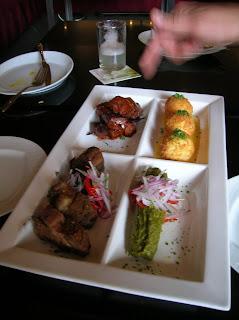 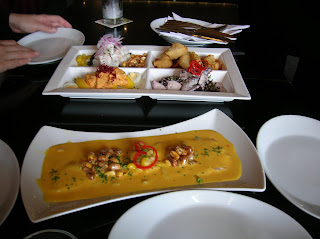 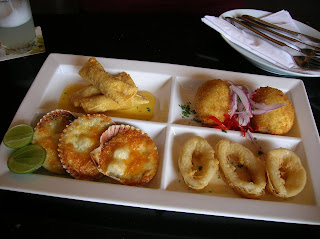 Peru is well known as one of the gastronomical capitals in Las Americas. Unfortunately when I was in Peru, we really were travelling on the cheap and ate some really bad and cheap food in some bad restaurants. A real shame.
When we were in Bogotá we visited Lina’s cousin, and he recommended we go to a Peruvian restaurant called Nazca for some brunch.
My recollection of Nazca in Peru left sour notes in my mouth, as we were nearly robbed in that unfortunate town. Only famous because of the ancient culture who resided there many many years ago. It’s not a town I will return to.
Fortunately this Nazca in La Zona Gourmet of North Bogotá is a place where I would return in an instant.
The décor is slick and modern, upstairs in the front are some very comfortable sofas where you can and we did spend a few hours chatting and eating some delicious food. Downstairs you can sit either in the garden or inside. All quite formal, we preferred the sofas.
As we were new to the restaurant and in the hands of a regular diner we let Alonso order for us. He came up trumps.
We were treated to four sharing plates, each with four samplers on. Two of which were fish, one fried and one cold plate, and one hot meat plate which had a great piece of ox heart. I love offal. Of course we had a desert plate. All were fantastic, except I cannot bring myself to eat fish with Parmesan cheese. Not very Peruvian I know.
The fish was really fresh and the sauces they were coated in were a perfect match. Unfortunately I cannot remember all what we had as after 5 quiet strong Pisco Sours my memory is kinda patchy. The Peruvian’s like their Pisco blended with egg whites, lemon juice and topped off with some sugar syrup. Which is in stark contrast to the Chilean way of only mixing it with lemon juice and sugar to taste. I have to admit the Peruvian way is more delicate and a lot tastier. That is why 5 went down so easily.
All in all it was a fun afternoon with some great conversation, good food in good surroundings. What more can you ask for in life.
Nazca
Calle 74, No. 5-28
Bogotá
www.restaurantenazca.com
Posted by Mzungu at 06:00 1 comment: Links to this post 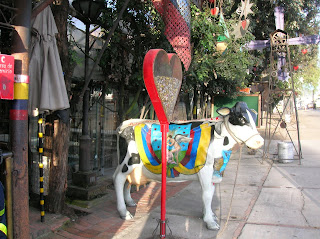 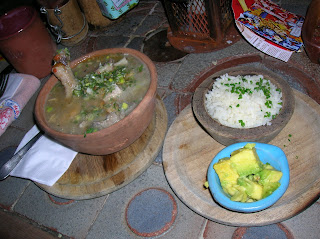 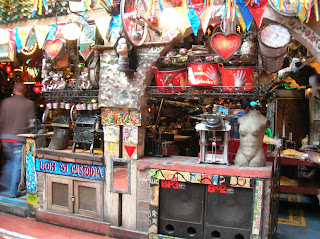 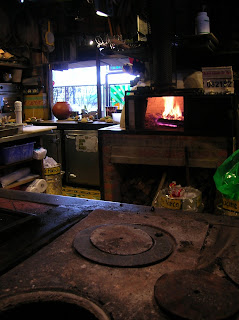 I had heard of this restaurant from my wife’s cousin amongst others. It’s a real Bogotá institution. Every person who has spent anytime there has eaten there at least once. Some it is a weekly experience.

We were taken there as a treat after a day of hard day of sight seeing at The Salt Cathedral. Inside these salt mines they have carved out many large outstanding halls. It kinda reminded me of the …………. In Lord of the Rings. It’s pretty impressive, but still kinda weird. They can hold mass for over 3000 people, and a lot of people get married there.

So after this bizarre place we were taken to Andres, Carnes de Res. This restaurant can hold well over 300 people in one sitting. I so pity the chefs there. When we arrived, it was pretty empty. But still had more people then most restaurants I know in London have when they are busy.

It’s decorated to such an extent with small kitsch objects that strangely it actually works. Certain sections even have street names. The menu is vast and takes a while to go through. It’s contained in a machine that you have to roll it up and down.

I took a stroll around and had ganders at the kitchen. All wood burning stoves. Boy it was hot just standing on the other side. Never mind being behind those stoves for a busy shift on a Friday or Saturday night. All the little knick-knacks that make up the decoration you can buy in the small shop at the other end of the restaurant. Most of it would look out of place anywhere but here.

As I had been eating too much food recently I decided on Sanchoco. Basically chicken soup. Chicken portions (mainly leg) cooked and served in its own broth with a few vegetables and potatoes thrown in for luck. This one was a house speciality and it contained some pork leg and pork ribs. It was delish, and the best one I had ever had. Most of the time the broth is made up with a stock cube, and the chicken is either over cooked or dreadfully undercooked.

Everyone else had large cuts of beef. In fact they were so big that one plate would have fed two or three people in London.

Even though I only had chicken soup, I was stuffed. But thankfully I had not had the meat option. Just to prove how bizarre the place is the bill came in a shoe cleaners box with a magnifying glass for the people who cannot believe how expensive the bill is. Thankfully we were not paying. Gracias Ricardo for a fantastic day.

When we left which was about 6pm, it was really starting to fill up, and it stays open till 3am. I said goodbye to the chefs, and hoped they had an easy shift.

A Day of Bad Food 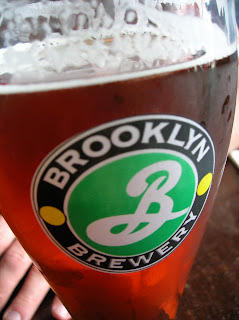 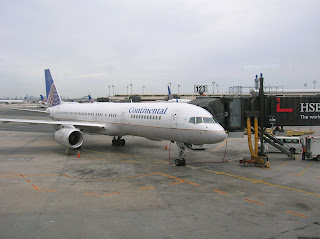 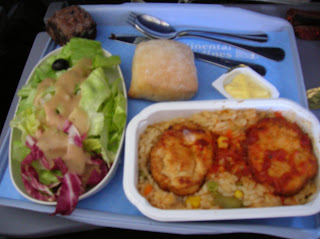 I have flown on so many airlines now, that it has got to be quite dull to fly. It just doesn’t excite me as it once did. That’s what you get for working as a travel agent for 5 years.
We flew with Continental from London to Bogotá, via Newark airport. I have flown with them a few times before and the food was better than this. As per usual on planes it’s either a choice of Chicken or Beef. The beef meal was a lasagne, which ran out long before the stewardesses reached us near the back of the plane. So we were all left with the chicken meal. It was rank. Some soggy rice, with some chicken(ish) rissoles in what was meant to be crispy breadcrumbs. But alas it was soggy and tasteless. I pitied the bird that had a wasted life to feed me this rubbish meal. The cabbage salad was the highlight. Now that is saying something. But at least I had the first two Godfather films to keep me entertained.
Newark airport is a fast food gorgers delight. Shocking. As it took us over an hour to go through immigration, we were not left a lot of time to actually eat something. But I knew the Brooklyn Brewery had a bar there, so thought we might get a decent burger with some good beer. How wrong we were. The beer was really good. Brewed at a microbrewery in Brooklyn. Nice colour and taste, and went down well. Thankfully so as the burger and fries were actually microwaved. Big let down, as the place had that dodgy pub/bar feel to it. So actually the food fitted.
If we had of had more time, there are one or two other places that we could have gone to but alas pointless US immigration and customs prevented us.
The flight from New York to Bogotá was with a wrap a la Mexicana. The sauce was hot and spicy and improved the otherwise bland flavours.
Thankfully Bogotá fed us well. More on that in the next blog.
Posted by Mzungu at 04:01 No comments: Links to this post 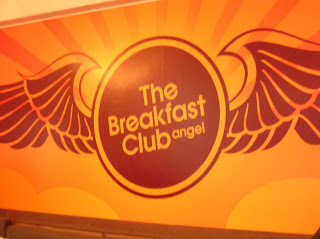 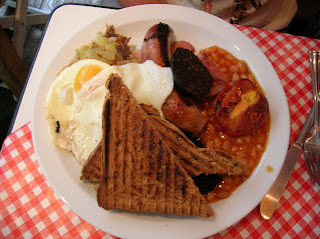 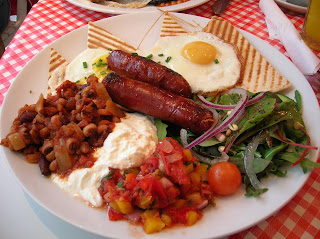 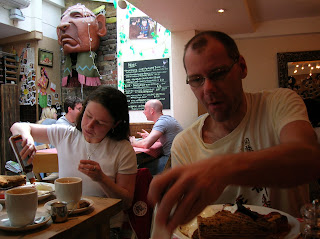 What do you expect from a place that calls itself the Breakfast Club, apart from really good breakfasts. Well, that’s what you get. There is normally a queue outside with people waiting to get in. Which is always a good sign… For me, I don’t mind queuing but for others who have no patience it is a problem. Their loss.

It’s a fun, quirky place, lot’s of 80’s memorabilia on the walls, which was my teenage decade. Good and bad memories…. There are two other branches, one in Soho and one in Hoxton.

They have a varied menu, consisting of all the funtime breakfast favourites and a few other ones thrown in for good luck. The afternoon menu has a lot of burgers, jacket potatoes etc. The burgers are made in house and are really good. Disappointing are the lack of potato wedges that came with it. I want more.

But it was just the breakfasts that kept me coming back. Well actually I only ever had the Full Monty. I’m a sucka for a good breakfast, and when I find something I like, I stick with it. They have the largest sausages ever and some quality black pudding.

Lina has varied her menu, well she is the experimental one after all. The Eggs Benedict were well cooked, the eggs had that perfect tear drop shape that everyone likes. The Hollandaise was not as good as mine, but I have made several thousand litres. Kinda perfected it now. The Huevos Rancheros were not as I remember them in Mexico, but for this small corner of North London they were perfect.

Now, I wish I had eaten there more often than I did as in all my visits to Colombia, I have never seen sausages or good bacon on sale anywhere. What they call sausages is a hot dog sausage. So my full English in Colombia is gonna be a tad short. Or maybe I make then myself. This is an idea I have been playing with for a while. I’m not sure if they have Heinz baked beans either. Can life get any worse? Hahaha.

Well at least I know if things do not work out here, there is a Full English waiting for me …..

Posted by Mzungu at 05:52 No comments: Links to this post 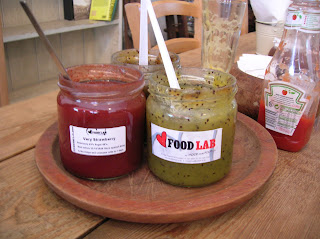 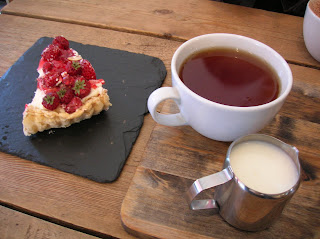 I have been meaning to post this bog for ages now, but with the hassle of getting everything ready for our move to Colombia, everything not connected was put on the back burner….
We discovered The FoodLab which is set within a nice stretch of Essex Road. Quite near a good green grocer, good butcher and a very good fishmonger. A rarity in London these days.
We ate there on several occasions, either for breakfast, brunch or midweek lunch and the food was always lovingly made and served in its own individual style, all with the usual Italian flair. The restaurant (if you could call it that, as it feels more like an upmarket café) is decorated in true rustic Italian fashion, with the veg and fruits littering the shop. You regularly see the chefs taking their supplies of veg and fruit back to the kitchen to prepare a dish …
The FoodLab is only open in the morning for breakfast and stays open till about late afternoon. It has become a popular spot for lunch, especially so as it’s a stones throw away from Upper Street. The portions are quite large, which is good. The prices are good also. What more could you ask for …
The Full Italian Breakfast consists of pancetta, Italian sausages, and some homemade beans, eggs, as well as some great bread. It is a breakfast of kings. One I loved and had on several occasions. After making a million eggs Benedict at the restaurant, I could never face one there, but Lina had it a few times and enjoyed it.
Lunchtime pasta dishes include Pasta with Ceps, with Pheasant, Ragu Bolognaise, and I heard the Lasagne is truly great.
I haven’t tried them, as normally full after a plate of pasta, but the cakes look delicious. True pieces of art.
It’s one place I am going to miss, but maybe what ever we do in Colombia, the FoodLab has shown me to keep cooking with Love and you will never go wrong.

Posted by Mzungu at 16:46 No comments: Links to this post