We or maybe it was just me, who was keener on living around Herne Hill that we came back for a second visit for some more flat hunting.
It’s just unfortunate again that the estate agents kept showing us flats that were available to move into the following week, even though we kept telling them that we cannot move until the end of March. Useless bastards.
Whilst we were waiting in between what turned out to be a wasted day visiting flats that wouldn’t be available at the end of March. We decided to have a quick bite in Café Provencal, a small friendly joint underneath the railway bridge.
I liked this small café, the staff are nice and friendly, it’s a bit quirky, which I always like in small places. They exhibit plenty of art and photographs, I imagine done by the local people of Herne Hill. It’s nice that there are places where people can exhibit their art and also try and get it sold as well. 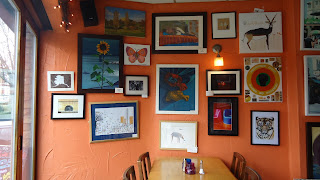 We both ordered the full English breakfast as looking at flats is pretty damn exhausting, and we had two more to see that afternoon.
The food was pretty good, even though the tatties were a tad charred, though not overcooked, the rest of the brekkie was fine though, and gave us a well-needed energy booster. Nice eggs, nice sausage and good bacon.
It wasn’t the best breakfast I’ve ever eaten and it wasn’t the worst, but it was perfect for that particular moment in time. 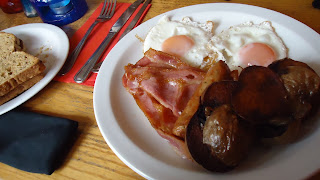 The place seemed pretty popular as loads of people were coming in and making reservations for that night. We also kept seeing loads of young families coming in and we kept wondering where they kept putting them. It turns out there is a separate kiddies area for families. Phew, I was dreading having a screaming kid and his hyper active older brother ruining my Saturday brunch time meal. Got to love a place like this, that knows that no one wants to eat near kids. 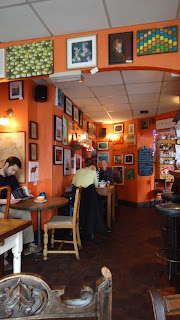 I was really imagining us living here in Herne Hill. Unfortunately one of us wasn’t. I think it was the ineptness of the estate agents that was putting her off. We were also up against the wall here, as one of us was off to Colombia at the start of March, and we really wanted to get a place before she left, as we were either gonna end up in any old place out of pure desperation. Or we would end up in some shithole that I chose whilst she was away. Neither option was good, although the first option would be down to Lina’s fault not mine, unlike the second one which would rest on my poor shoulders for up to one year. She would never say something, but I would know, the anger would simmer for ages, nothing being said, but tensions would be there. 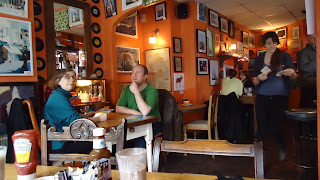 That’s why just before she pottered off to a warm 2 weeks in Medellin, a place came up in Stokie. She saw it, sent me a text and took it. I’ve seen it form the outside but not inside. That I get to, do when we pick the keys up and the end of this month.
So we shall see what culinary delights that Stoke Newington and Dalston have to offer me. Even though I kinda know it a little. This does mean that Mangals is now even closer to us than ever before. Rock on.

Haha... know exactly what you meant about no one likes to eat beside screaming kids. :)
I am more interested about your flat hunting though. The agents must have hoped that they'd show you something that would wow you into moving in early... good luck on your hunt!

LC - Damn estate agents, they must have thought we had money to throw around. I wish. Have found somewhere in Nappy Valley or Stokie to the norme