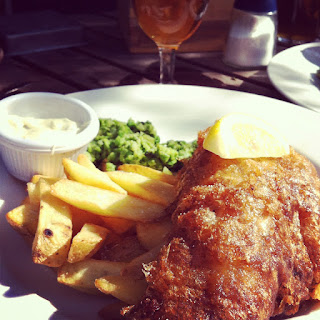 To say I’m still peeved over the fish n chips we had at the Crown and Greyhound is an understatement. It ranks up there with the one and a half roast potato’s I got at the Bull on Upper Street. Something I will never forget or forgive.
Dulwich Village is as it says it is, a village. A small piece of the country firmly settled in South London.

A lovely place, that reminds me a lot of Basing, where I spend my teenage years bored out of my head in being stuck in such a quiet place. Now I’d give my right arm to live somewhere similar.
Not much happens in Dulwich, which is how I am sure everyone who lives there wants it.
The Crown and Greyhound is the centrepiece in this quaint south London village, it’s a large old time pub, which befits Dulwich.
The pub has a typical menu, all of which you would find in any pub through out the land. There is a good selection of ales on tap, which really made my mind up to eat here. I love a pub that serves good ales on tap, it gives me confidence in everything they do. Yeah I know it’s a stupid thing to believe in, but I do. Sometimes it works, sometimes it doesn’t. Sadly here I was well off the mark.
It’d been a while since we’d eaten fish n chips. The one at Highbury Barn has now officially lost all my confidence. Just their opening hours, which they never keep to, has made me give up on them.
I got a tad concerned with the food here, when I saw a hamburger go past, with the bun twice as big as the meagre piece of meat in the middle. I was a worried.
I’ve never been so disappointed by a meal as this one. The fotos do not capture how crap it was. They actually make it look quite good. Believe me it wasn’t.
Where to start. The chips were of the oven kind, and they were soggy, obviously been cooked and then left hanging around before being thrown back in the oven to warm up again.
The batter on the fish was greasy, there was grease dripping off it onto my plate, which was creating a small pool of oil by my chips. All the frier needed was a few more degrees and this wouldn't have happened. The fish itself was less than ok, it was pretty tasteless and it fitted well with the greasy batter.
The tartar sauce was cheap mayo with chopped gherkins in it. Crap. The peas were a high point though, crushed and mixed with chopped mint, but not enough to save this meal.
Dulwich is a lovely place, and the Crown and Greyhound is a nice pub with some good beers on tap as I've said, but for the food. Sadly no. It did however remind me of a country pub meal back in my old village. Very bad.

Quite dissapointing to read your sharing on the meal of fish n chips. Well, sometimes we explore and then find out for ourselves on the quality of food.