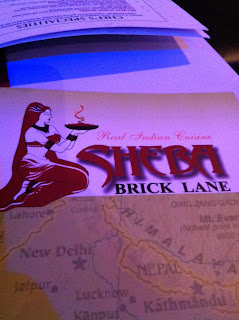 I’ve never actually eaten at an Indian restaurant on Brick Lane before, as from what everyone who has eaten there has told me, it’s for groups and tourists. If you know curry you give this street a miss.
So when I got an invitation to sample the food at Sheba I was a little shy of saying yes. But in the end I decided what the heck let’s see if it’s as bad as everyone says.
I normally never down that way at night, mainly because I hate to run the gauntlet down Brick Lane, running past and dodging all the restaurant touts.

It reminds me of walking down the sandy street in Dahab many years ago, with dozens of Egyptians trying to get you to eat in their place, when you both knew you were heading to Sharks for some nosh and ohh those damn fine milkshakes.
The restaurants on either side of Sheba seem to have an extraordinary amount of touts outside trying to tempt you inside.
Inside the place was jammin’ and I mean jammin’. It was bustling to the rafters upstairs, with people walking in, saying table for 8 or we’re part of the 20. Shit.
They were so packed we were thinking is there room for us, but they managed to find a table for us downstairs next to the group of 20, who actually for such a large amount of people, they were pretty quiet. It was like being in La Paz.
Their menu is pretty large to say the least, but they are one of the founding fathers of Indian or Bangladeshi restaurants on the Lane. They’ve been open since 1972, and some of the old time favourites are still on the menu. Classics. 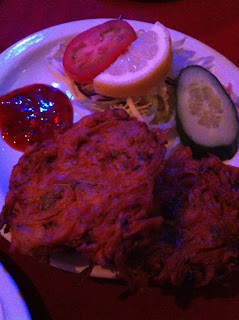 So with a pint of Kingfisher, some papadums and chutneys, we began to trawl our way through the menu.
I am really not a fan of long long long menus and I wish this place never had the same as well, as we wanted to get our order in before that 20, otherwise we’d be here all night.
I was really tempted to go for the Bombay Blast. It’s described as a very hot dish with small pieces of lamb cooked in the chef’s special sauce of green, Mexican, Naga and Africa chilli’s, spring onions and red kidney beans. Mouth burning stuff.
Sounded like a blast literally, but somehow reason took over from macho side and it was put on the back burner. 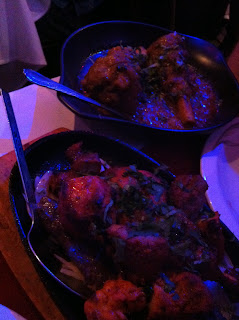 So after much deliberation we opted for the Tandoori mixed grill and with a recommendation from the waiter the lamb Lucknow. Plus rice, keema naan and some onion bhaji’s to start were also ordered.
The onion bhaji’s were quite nice, fair size and good seasoning with a chilli sauce for dipping, a tad greasy but not bad.
The mixed grill to be honest was not the best in the world, it was large enough to suit anyone really, but some of the meat was a tad dry and over cooked, but the kebabs and the lamb chops and tikka were good and nicely spiced. 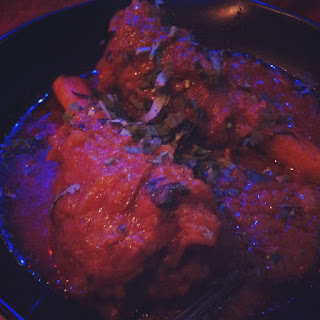 The lamb Lucknow was really good, the spicing was mild, and the lamb just flaked off the bone and melted in your mouth. Really good. The sauce was thick and as I said mildly spiced and never over powered that good lamb. It’d been a while since I had a lamb shank and this was one of the best.
The leema naan was slightly limp as if it had been around for a while waiting to be eaten, but it was ok.
I was really surprised with Sheba, I was expecting not very good food, but what they served was pretty damn good, especially that lamb. Very unexpected. 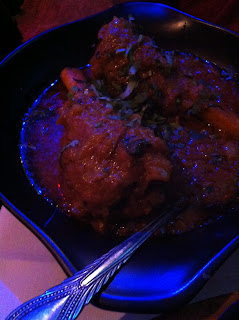 The restaurant though I would definitely recommend for groups, as I said there were a few 8’s there and a group of 20. Maybe not the best place for a quiet romantic meal for 2.
If you check out their website and twitter account, they have discounts of up to 35%, which for a large group is a bonus.
Also as a last note, apparently the best John Smith’s advert was filmed here. Watch and laugh.

That Lucknowi lamb does sound amazing. I never did end up in Brick Lane all the time I lived in London, tbh, Southall was much closer to Harrow where we lived. But I did end up in a New Year's rave once in an abandoned warehouse off Lee Valley, and the next day stumbled around East London trying to find my way back to the civilized West :) Oh, and I also went to the bagel shop there too...

Sometimes old time restaurants really do surprise us though, I guess they are popular for a reason.

Michelle - Again for the same reasons never been to many restaurants in Southall and Hounslow. Just too far away. Yeah I love those bagel shops and the salt beef. Hope you are enjoying Canada.