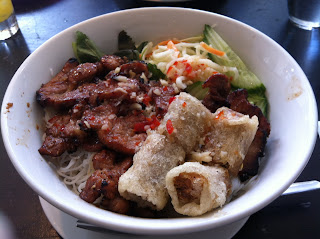 Shamelessly it had been quite a while since the last visit to Viet Grill, a long bloody time.
This has come about that we are trying, but failing to eat at a few regular places and then at some old favourites once in a while.
Sadly the old fave’s are being missed big time due to this new practice, but until that £100,000 job comes along then this is how it has to be. But we’re slowly doing the rounds again.

Anyhows enough waffle. Viet Grill for me is still the best Vietnamese restaurant in London and serves the best food. The surroundings may be swanky and pretty modern, but it has a nice vibe, although sadly the next table was populated by a very annoying woman who was name and city dropping at the drop of a hat, whilst her “friends” were lapping the shit up. Fuck, what has happened to East London. 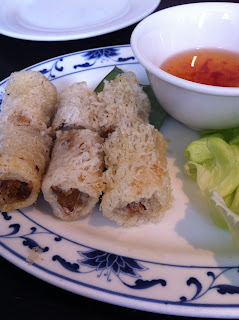 The food, yes back to the food. It’s good, damn good. Instead of our normal starters of summer rolls, we opted for the crispy spring rolls filled with pork and mushroom. These little rolls filled with the well season filling were light and crisp and more importantly not greasy. To be honest these were so good, we could of just munched on these all afternoon. Awesome bar snacks.
Our mains of Ox Cheek au Vin Pho, and my all time favourite street food of Bun Cha Hanoi style.
The ox cheek was melt in the mouth gorgeous, and has given me ideas after ideas of what to serve with my noodle soups instead of roast pork belly. Damn it was good, it had been with a mixture of cinnamon and black cardamom, and I’m sure it had a hint of star anise as well. The soup base was good, not sure if it needed the au vin for me, as any good meaty beefy stock is fine for a pho. The noodles were good, nice and dense and a little spring to them. Yum. 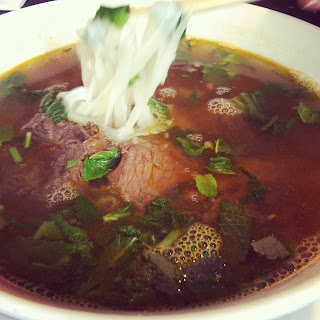 The Bun Cha, which came with more crispy spring rolls, oh life just keep getting better no. This was much better than when I tasted it the last time. The noodles are served at room temperature, which to be honest most food tastes better that way.  I couldn’t taste the lemongrass on the pork loin, but the bar-b-q taste was evident and lovely. Not over cooked and still juicy. Nice. 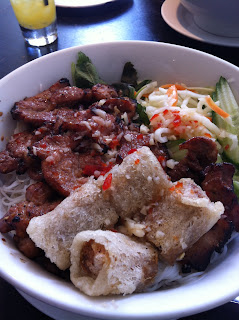 Then it wasn’t the weather for caphe sua da, oh how times change by a week or so, but a couple of cups of caphe sua nong. It’s the condensed milk that has me hooked. I’m actually drinking a small glass of it now and it’s delish, it’s addictive and I wish more places would have it on their menus, as it’s as good as a pudding. 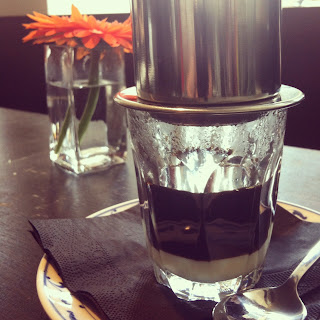 I think I’m gonna have to add Viet grill to my small group of restaurants, as this is still my best Vietnamese restaurant in London. Then again I haven’t tried the other restaurants in this awesome group.

I have been visiting your recipe blog from past 3 months. The way of recipe tips looks to be easy for all readers. I would personally recommend our blog visitors to subscribe to obtain useful posts like this periodically. Particularly post on "Viet Grill - A Revisit" is awesome. Get in touch with us via our websites North Indian Veg Restaurant | Sweet Shop