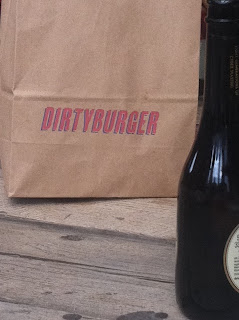 I am a big fan of short menus, but Dirty Burger’s has to be the shortest I’ve ever seen in London.
With one item on the menu, cheeseburger and 2 sides, it could be the shortest menu ever. Gonna be hard to beat.

This does however make ordering pretty simple, and a particularly difficult friend of mine would hate this place as she wouldn’t be able to deliberate over the pro and cons of each dish that day.
The Soho House Group have really gone in the other direction with this one and I like it, situated in a tin shed below some stairs behind Pizza East, is Dirty Burger. If you didn’t know it was there you’d walk straight past. I imagine it misses out on a lot of passing trade, but for a Thursday lunchtime it was pretty packed. 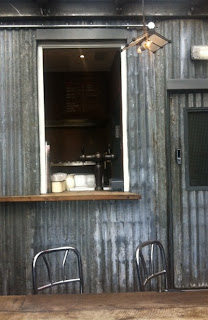 So Cheeseburger and a side of fries ordered I took my seat in the large table in the middle. Ketchup, mayo and mustard were all close by for me to drench my fries in.
The burger came wrapped in Dirty burger’s own paper, nice touch. Opening my little bun of delight, the bun looked like it would hold together and thankfully it did, as I hate it when you begin eating and the bread just falls apart. 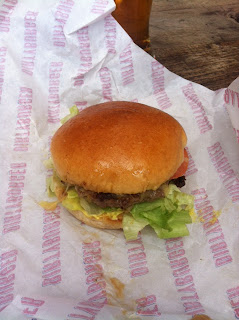 The meat itself was juicy, compact and bloody tasty, with a sprinkling of mustard and ketchup it was one of the best burgers I’ve had in a long while.
Special mention goes to the fries, which were crisp and salty. Next time I’ll try the onion fries as well, well being a greedy bugger that I am. 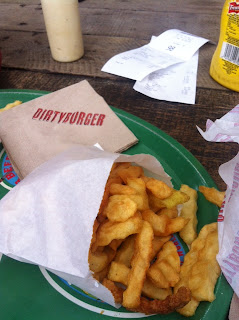 Opted for a beer, although I wish’d I’d had a milkshake instead. Again something to try on my next visit, which I think will be pretty soon.
Can’t say if this is the best burger served in London a the mo, as I really don’t eat enough of them to know, but after a couple of Byron visits, this is much better. Yeah Byron for me has started to slip, probably due to their rapid expansion everywhere. Take note, you are getting yer ass kicked guys. 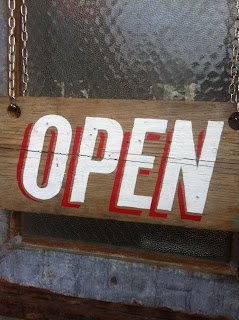 Love going for burgers in London so I'll be sure to check this one out! I like MeatLiquor's burgers - would you say Dirty Burger is better? x x

Angel - It's a bit difficult to say really, as each has it's merits.
The problem I have with MeatLiquor et al is that it is kind of hard to taste the burger with all their sauces.
With Dirty Burger you get to taste the meat as all the topping the do is cheese. So for me Dirty wins, but I do enjoy Meat's from time to time.